Hey Mark, Why Did You Become A Lawyer?

The year was 1988.  Ten-year-old Mark Osborne was sitting in the West Elementary School library along with his classmates.  It was Wednesday afternoon and at West Elementary that meant one thing for the 5th graders – it was BOOK DAY!

Each Wednesday at 1 pm, Mark's fifth-grade class would venture down to the school library, pick out one book to take home, and read for two weeks. 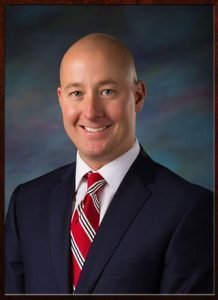 On this day, Mark looked forward to checking out the Adventures of Sherlock Holmes.  As he walked to the library with his classmates, Mark grew excited.  He wondered if he would be able to understand all the big words throughout the text.  Would he be able to figure out who was the bad guy before Sherlock Holmes revealed his findings?  Yes, this Wednesday afternoon was going to be a great day for reading.

Mark didn't have to wait long before learning why it was that Ms. Quinn's dour expression was aimed directly at him.

"Yes," replied Mark to Ms. Quinn while standing amongst his other twenty-five classmates.

"I hope you don't think you will checking out any books today," warned Ms. Quinn.

"Because you still have not returned the last book you were reading about a haunted house!" Ms. Quinn explained, in a voice that echoed into the ears of every last single student and teacher within hearing distance (which at this point felt like the entire school to Mark).

Mark thought for a moment and looked over at the book return desk.  He then narrowed his gaze and focused upon the book-drop-slot, wherein students could place their returned books.  The books would then fall into a large basket with wheels.  With this sizeable wheeled basket, Ms. Quinn or her minions would roll it up and down the aisles of bookshelves, placing the returned books to their rightful homes on the bookshelves.

"But I did return the haunted house book, Ms. Quinn.  I returned it a few days ago," Mark explained, laboring to keep his voice from sounding too high pitched.  He could hear someone giggle.  Mark also heard the other kids whispering off to the side.

Ms. Quinn looked at Mark, and her face turned three shades of red.  Her nose was practically purple.

"You most certainly did NOT," shouted Ms. Quinn with the ferocity and sudden rage of Yoesimite geyser.

"I have not seen that haunted house book since you checked it out two weeks ago.  You are irresponsible, Mr. Osborne.  You are careless. Furthermore, you are now, I see, dishonest as well," shouted Ms. Quinn for the whole school to hear. "Now go sit down. No books for you until you return the haunted house book to this library."

Mark saw that nothing he could say would dissuade Ms. Quinn from continuing her rant.  He looked down at the orange carpet.  He could hear Ms. Quinn's voice colliding against him and rolling over him like a tsunami against a lighthouse. She just kept going.  Mark could hear her saying words like "shame" and "poor other kids might like to read about haunted houses," and "selfish." Mark just looked at the floor as Ms. Quinn's voice filled his ears and the chemical smell of carpet shampoo filled his nostrils.

On the third week that followed Ms. Quinn's public tongue lashing, Mark walked to the library with his class.  He found a corner in which to hide.  He grabbed Herman Melville's Moby Dick from the shelf.  Mark tried to remember what page he last read, seven days previously.

As Mark sat there quietly, trying not to be seen, he felt a tap on his shoulder from behind.  Mark turned around, fully expecting someone to tease him about not being able to check out a book for the third week in a row. There stood Ms. Quinn. "Oh no," Mark thought to himself, "Now what?"

"Mr. Osborne!  Come with me please.  Class  . . . CLASS." shouted Ms. Quinn. "Everyone gather around, immediately.  I have something to tell you.  Mr. Osborne, you come up here now."

Mark could feel his heart pounding and his face reddening.  His ears buzzed.  He contemplated just peeing himself so that he could justifiably run to the nurse and have an excuse to go home – or to the doctor.

Mark wanted to be anywhere but next to Ms. Quinn in front of this class again.  For the last two Wednesdays, Mark had managed to hide out in the English Literature section of the library undisturbed.  Now his refuge was disrupted, and there was no place to go.

Mark looked at Ms. Quinn's brown eyes and counted the wrinkles on her forehead, which made no secret of her sixty-one years on the planet.  He then looked down at that same damned orange carpet.  He waited for the onslaught to begin once more.

Mark thought he misheard Ms. Quinn.  He looked up from the carpet and met Ms. Quinn's eyes with his own.

Ms. Quinn continued, "I found the haunted house book lodged between two desks.  You did return the book when you said you did.  I see the return date is stamped right here.  How the book ended up stuck between to other desks, I do not know. I will have to speak with the kids who help me out after school."

Ms. Quinn concluded, "I want to apologize to you Mark, for my behavior.  I want all of you kids to know that Mark did nothing wrong and was not lying when he said he returned the haunted house book."

Mark didn't know what to say.  Ms. Quinn extended her hand and invited Mark to take it.  Mark shook Ms. Quinn's hand and muttered as best he could, "It's ok, Ms. Quinn.  Everyone makes mistakes."

The other kids just looked on.  Some smiled. Some clapped.  But mostly, they returned to reading their books.

That was the first time, although not the last, Mark Osborne learned what it was like to suffer the humiliation of being falsely accused. To have his explanations disbelieved and rejected out of hand.  There was no due process in or presumption of innocence in Ms. Quinn's school library.

Mark began reading books about innocent people being falsely accused or convicted of crimes they did not commit. Mark read about the lawyers who defended them.  He then began watching law movies and courtroom dramas.  He thought that maybe one day he too, would like to be a lawyer so that he could help defend the innocent.  Mark never forgot the humiliation he felt all those days and weeks in the library – being punished for something he had not done.

Many years later, Mark is no longer in the fifth grade.  He is a practicing New Hampshire criminal attorney of almost twenty years.  He knows that many times his clients are innocent.  Mark also knows that sometimes his clients are not.  But, above all else, Mark knows that the innocent and guilty alike are entitled to justice, fairness, compassion, decency, and as zealous of a defense that the law and facts allow.

Being accused of a crime, whether you are guilty – innocent – or somewhere in the middle, need not be an unrestrained exercise in humiliation nor degradation.

At OSBORNE LAW, we can't promise that all the world will be perfect should you need our help.  There are law books here and some computers, but no time machines or magic wands.  We can't undo the past.  We won't promise the future.  But, at OSBORNE LAW, you will be treated with dignity and respect. Most arrests and accusations cause one to have to stand in front of a courtroom at some point as his/her case winds through the legal system.  But, contrary to Ms. Quinn's school library, you will never have to stand alone.

We will stand FOR you, and WITH you.