It is never fun to be arrested.  It is always stressful to have an accusation of wrongdoing thrown at you.

Perhaps you are on this site right now because you or someone you care about has been recently arrested.  If that is the case, then allow us to tell you some things that most people don’t know.

First, not all crimes and punishments are created equally.  Under New Hampshire law, the criminal and motor vehicle codes consist of three offense categories.  We say “offense” categories, because one of the categories isn’t a crime at all. 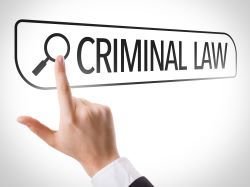 The first category of crimes are FELONIES.  Felonies are broken down into three categories:

Class A Felonies are serious crimes that carry with them lots of potential prison time and high fines.

Crimes such as 1st Degree Assault, Aggravated Sexual Assaults, Night-time home invasions and Burglaries, Armed Robberies, Weapons, and Theft (depending on how much money someone allegedly stole and/or how many times he/she has been convicted of Theft or Fraud in the past).

The worst-case punishment scenario for someone convicted of a Class A Felony is up to 7 ½ - 15 years in prison and a $4,000 fine.  Rest assured, just because that is the worst-case possible scenario, it doesn’t mean that it is the likely scenario.  Most people convicted of Class A Felonies (even if they have less than favorable criminal records) do not go to prison for 7 ½ - 15 years in prison. Almost no one ever pays a $4,000 fine.

Every case is different, of course, but at OSBORNE LAW, we want to use this page as an opportunity to provide you with basic information about crime classification.  Attorney Mark Osborne is a dedicated criminal lawyer in NH and understands that you may be pressed for time and need answers fast if you are on this page right now.

Class B Felonies are serious crimes, but usually not as serious as Class A Felonies.  Class B Felonies usually consist of Hard Drug Crimes, Theft, Assaults, some Sex Crimes, Obstruction of Justice and other “process” Crimes of Dishonesty.  The worst-case punishment for someone convicted of a Class B Felony is up to 3 ½ - 7 years in prison and up to a $4,000 fine.  It is not a coincidence that the maximum punishment for a B Felony is half of the worst-case punishment for a Class A Felony.  It also bears repeating that just because the worst-case scenario for a B Felony conviction carries up to 3 ½ - 7 years in prison doesn’t mean you or anyone else is actually going to receive such a punishment.  And, once again, almost no one ever pays a $4,000 fine.

Special Felonies?  What are those?  Special Felonies in New Hampshire are typically crimes for which the maximum punishment deviates from Class A and B Felonies’ standard maximum punishments.  For example, if you are convicted of being a Habitual Offender (meaning you drove a car after the DMV labeled you a Habitual Offender and suspended your license for at least 1 year), then the maximum prison sentence you could face is  2 ½ - 5 years in prison (as opposed to the standard B felony maximum of 3 ½ - 7 years in prison).  There is nothing special about them per se, other than the state legislature apparently thought some crimes are either “not as bad as” or worse than the standard two felony categories.

The next category of offenses is Misdemeanors.  There are two types of Misdemeanors in New Hampshire:

Whether someone is charged with an A or a B misdemeanor, it is important to understand that both

are criminal convictions.  Meaning, if you were convicted of either an A or a B misdemeanor (even if the B misdemeanor only required you to pay a $100 fine) you would have a criminal record.  That means if you were filling out job applications or student loan requests, and the question came up about whether you had any criminal convictions, the answer would, unfortunately, be YES.

At OSBORNE LAW, we work very hard to keep you from getting a criminal conviction for either type of misdemeanor, especially if you are wrestling with a first offense arrest/accusation.  Exactly how or what we do to help people escape criminal misdemeanor convictions is a discussion for another day (but if you really want to know, call to speak with a criminal lawyer in NH at 603-595-5525).  What you want to know right now is, “What am I looking at for jail or punishment exposure?”

A Class A Misdemeanor conviction carries up to 12 months in jail and up to a $2,000 fine.  A Class B Misdemeanor carries no jail time and a maximum fine of up to $1,200.  Both Class A and B misdemeanor convictions can cause you to lose your driver’s license for a while if your misdemeanor involved drunk driving or overall bad behavior (alleged!) with a motor vehicle.  Most Misdemeanor arrests stem from relatively minor crimes (as compared to Felonies) such as Simple Assault (pushing, punching, wrestling, and other physical contact without anyone being seriously injured), Criminal Threatening (with no weapons involved), Shoplifting, minor Drug Possessions, Moderately serious Major Motor Vehicle offenses, Theft, Disorderly Conduct, and Criminal Trespass. To avoid ahaving a misdemeanor on your record, it may be a good idea to consult with a criminal lawyer in NH.

Most Misdemeanor arrests stem from otherwise good people either losing their cool or having too much to drink after a bad day or night.  Domestic quarrels with a souse or significant other also lead to a whole host of arrests and accusations which fortunately fizzle or get ironed out once time passes and cooler heads prevail.  Even though most Misdemeanor cases do not result in anyone having to go to jail, a criminal conviction is the last thing you need if you value your job, education, and reputation.  Not to mention, with the advent of social media and press-release-happy-police departments, even a Misdemeanor arrest is enough to wreak both temporary or long-term havoc on your lifestyle and reputation.  Imagine being fired from a well-paying job because you had more than ¾ of an ounce of marijuana in your car? Or, imagine being restrained and barred from entering your home because your boy/girlfriend says you pushed him/her over a CNN vs. Fox News debate?!

Many Violations are found in the New Hampshire Motor Vehicle Code.  Violations such as Reckless Driving, Negligent Driving, Speeding are commonplace.  The beauty of the Violation category is that many (if not most) Class A and B Misdemeanors can be negotiated down to a Violation if your case calls for such an equitable resolution.  If you have a long criminal record, getting Misdemeanors down to Violations becomes a more difficult task.

Convictions for Violations can cause you to lose your driver’s license if the allegation involved the use of a motor vehicle.  Violations do not carry any potential for jail time.  They do, however, carry a maximum fine of $1,000.  Although Violations are a far cry better than Felonies or Misdemeanors, please don’t take them too lightly.  If you get convicted of enough Violations, you might find yourself walking to work or out of a job altogether.  Most major motor vehicle offenses are Violations.  If you get enough of these, you will be deemed Habitual Offender, and your driver’s license will be revoked.  See HABITUAL OFFENDER on this site under the DMV/Motor Vehicle Crimes section of this page.

This website uses cookies to improve your experience while you navigate through the website. Out of these, the cookies that are categorized as necessary are stored on your browser as they are essential for the working of basic functionalities of the website. We also use third-party cookies that help us analyze and understand how you use this website. These cookies will be stored in your browser only with your consent. You also have the option to opt-out of these cookies. But opting out of some of these cookies may affect your browsing experience.
Necessary Always Enabled
Necessary cookies are absolutely essential for the website to function properly. This category only includes cookies that ensures basic functionalities and security features of the website. These cookies do not store any personal information.
Non-necessary
Any cookies that may not be particularly necessary for the website to function and is used specifically to collect user personal data via analytics, ads, other embedded contents are termed as non-necessary cookies. It is mandatory to procure user consent prior to running these cookies on your website.
SAVE & ACCEPT