Please take a moment and consider what we are telling you in this article.  If you have any illegal drugs in your car, get up, go to your car, and remove them.  Don’t tell yourself that you’ll get them tomorrow.  Don’t leave the drugs in your car because you plan on sharing them with friends later this weekend.  Don’t assume that you aren’t going to be stopped for some traffic violation.  Don’t assume that your driver’s license is current, and thus you have nothing to fear when it comes to side-of-the-road police interrogations or arrests.

Go get the drugs out of the car. 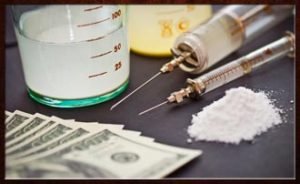 If you are reading this article, it may be too late.  You might already have been arrested for having drugs in your car.  In fact, at OSBORNE LAW, we are willing to bet that your “drugs in a motor vehicle” charge accompanies another minor or major charge.  Attorney Mark Osborne knows that police officers usually aren’t randomly stopping people on the road for the sole purpose of looking for drugs in their cars.  That’s not to say it doesn’t happen.  It does.  But at OSBORNE LAW, our experience is that drugs are found in cars after drivers and motorists have been stopped or arrested for an entirely different, unrelated crime.

This is how most motor vehicle-related drug charges and arrests go down:

Bronco Billy is loving the feel of his cylinders humming as he drives down the highway.  Bronco Billy is going to park his Bronco on a beach somewhere and camp for the night.  Knowing that he was going to spend some time on the beach, he grabbed an ounce of marijuana and threw it on the passenger seat before he left his home.  The bag in which the ounce of marijuana is stored is plastic, see-through, and not wrapped very tightly.  If Billy breathes through his nose, he can smell the marijuana.  The Bronco doesn’t smell like Cheech & Chong’s van or Snoop Dog’s crib. Still, the odor of loosely wrapped marijuana is definitely present.

Bronco Billy isn’t worried about the smell of marijuana because he doesn’t plan on getting stopped by police.  His license is current.  His Bronco is registered.  Billy’s insurance is all paid.  He is driving the speed limit.  Bronco Billy believes he is ok.  No police are going to be looking at his passenger seat today, where he has placed the ounce of marijuana.

Just a Bronco Billy starts to rock out a little to Creedence Clearwater’s “Proud Mary” he sees a police cruiser following behind him.  Bronco Billy sees the blue lights go on.  Bronco Billy pulls over.  Bronco Billy doesn’t want to make any sudden moves, so he doesn’t reach for the marijuana.  Instead, Bronco Billy grabs one of his COVID masks from within the center console cup holder and throws the mask over the marijuana bag.  Billy thinks to himself, “That will smell good later.  No one will have to tell me twice to wear my mask today.”

Billy contemplates saying no.  But the smell is rather obvious, and the cop wouldn’t be asking if he couldn’t smell it.  Billy knows he’s busted.  Plus, Bronco Billy inaccurately remembers that marijuana is legal in New Hampshire, the Live Free or Die state.  Billy tells the officer, “Yes, I have weed in my Bronco.  Here it is!”

“Bronco Billy,” the officer begins, “It is illegal in New Hampshire to have more than 3/4 of an ounce of marijuana on your person or in a car.  You have a full one-ounce.  Therefore, I have to arrest you for misdemeanor Possession of a Controlled Drug in a Motor Vehicle, pursuant to

OSBORNE LAW:  Meaning, any more than ¾ of an ounce is a misdemeanor and crime.

So, the officer arrests Bronco Billy for Transporting Drugs in a Motor Vehicle.  Let’s recall how Bronco Billy found himself in this situation.  He was stopped for tinted windows.  Even though Bronco Billy was driving the speed limit, his Bronco equipment was working, and his license was current.  Bronco Billy was blindsided by an unpredictable stop for tinted windows.  Granted, an overall harmless infraction.  But, it led to his arrest for having drugs in the Bronco.  Drugs that Billy assumed no one would ever see or find or have any reason to.

Don’t let this happen to you.  Get the drugs out of the car.  Do you know if your license is current?  Do you know if your tail light and directional are in working order (and will be at 1 am on Saturday night)?  Do you know for sure that you won’t be in a car accident that leads the police to your car?  Do you know all 100 + car codes and laws?  Nope.  No one ever expects to be stopped or arrested when they have stuff in the car that they otherwise shouldn’t.

What if Bronco Billy’s drug of choice was cocaine or shrooms or something stronger?  Then, Bronco Billy would be facing felony charges (in addition to the Transporting Drugs charge) all because of damned tinted windows.

If you find yourself in Bronco Billy’s circumstance, call OSBORNE LAW, and let’s put this matter behind you.  And no laughing at Attorney Mark Osborne’s plain gray Toyota Rav 4.  It gets the job done – and the windows are NOT TINTED. To speak with a transportation of drugs lawyer in NH Today. Contact Us at 603-595-5525. Free Consultations!